This ain’t your run-of-the-mill blues trio. It might even surprise you that the soulful musical texture flowing from the stage is in fact emanating from only three guys. And therein lies the beauty of porterdavis. With just three musicians, a wide variety of influences from Townes Van Zandt, to Muddy Waters, to James Brown, and a collective imagination that transcends their individual musical prowess, porterdavis dishes up some truly original roots music.Underneath the expressive lyrics and the smooth 3-part harmonies, is a band that was founded on a deep appreciation for the formidable musicians who have paved the way before them. Dan Barrett delivers the slide electric and acoustic guitar along with the lead vocals, backed by the English Simon Wallace on Chicago-style blues harp, and Mike Meadows rounds it out with his unique concoction of percussion instruments from around the world.Dan and Mike got their start by busking in the Porter Square and Davis Square subway stations of Boston, Massachusetts bright and early in the morning. It wasn't the most ideal stage, but it did provide a space in which they could experiment with their music—not to mention, a meaningful name for the band. Then in 2004, the guys decided to move their home base to Austin, Texas where they solidified the sound of porterdavis by adding a third harmony and the final member to the band, Simon.The band took a major step this year when Ray Wylie Hubbard introduced them to producer Gurf Morlix. Known for his work with Lucinda Williams, Robert Earle Keene, Slaid Cleaves and more, Morlix warmly welcomed the project of producing porterdavis. The finished product is a full-length album recorded without the use of Pro Tools technology, and performed on instruments much older than the band itself. 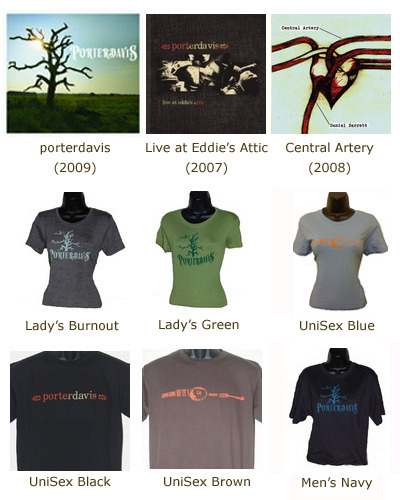